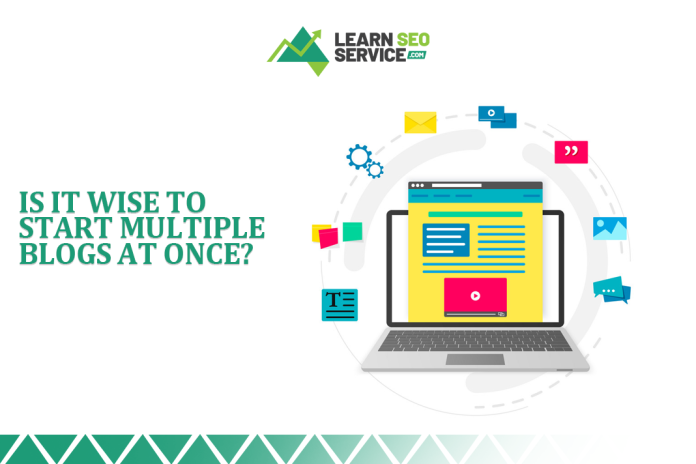 Blogging can be liberating. You are probably here because you have heard that there are people out there who are making hundreds, thousands and even tens of thousands per year through their sites. The great thing about blogging is that you can write about the things that you love, and others that you do not love, while travelling around the world.

But if one blog can rake in, as an example, a thousand dollars per month or more, wouldn’t it be wise to create two or even more at once? That way you could double your income. Well, things are not that simple. This article is based on my own personal experiences as a blogger.

What happens when you create multiple blogs at once

I have been blogging for over 5 years, and in that time, I have discovered that there are a number of advantages and disadvantages to having multiple blogs. My journey started with a generalized sort of blog that grew but at a rather slow pace. It’s one of the major failings for beginner bloggers, being too general.

You cannot create a site that talks about football today, computers tomorrow and potatoes the next day. Not unless you are running a news website. To create a loyal audience and following, you need to a website that focuses on one particular area.

In any case, I had that one website and it was making a few hundred dollars a month via AdSense. And then I decided to create a second site focusing specifically on the tech scene in South Africa. That site took off.

Within a year, it was already making over $2000 per month. So, now I had two sites, one of which was doing not so well and another which was doing great. I then decided to create a third, and fourth site. Those two were supposed to be monetised via Amazon.

They flopped. But why was that the case? Well, for one thing, it was a simple matter of running out of stream. I literally wrote myself to a standstill. I suppose having multiple sites would have been fine if I had other writers on the books. But it’s rather difficult to get good quality help these days.

You hire someone and you realised after they have submitted their article that it’s a plagiarized copy of some already existing article. Or maybe they don’t meet your deadlines. Or the effort that they put into their work just isn’t up to standard.

So, I was doing all the writing for those 4 websites. I consider myself to be a prolific writer, but with publishing an article per day each for the first two sites, it became too much work after a little while. Today the Amazon sites lie festering somewhere on the web, uncared for but not unloved.

Perhaps one day I will get back to them, give them a little CPR, and maybe they will take off. Because there was really nothing wrong with them, other than the fatigue of having too much work on one’s plate. In fact, one of them shows a lot of promise.

How many blogs should you have?

I gave this particular story to highlight the challenges that come from trying to have too many things on one’s plate at once. It’s easy enough to create a blog. You can have several up and running within a single day.

The challenge lies in giving them the kind of attention that they need to thrive. That’s because Google and other search engines love sites that get regular content. On the 1 year-old website that I talked about above, publishing is once a day without fail.

To get back to the question, how many blogs should you have at once, the answer is, as many as you can manage. A lot of people have had better success than me finding high-quality writers for their sites. If you fall into this bracket, then by any means, you can have many sites.

It’s just a matter of getting people to write all the content on your behalf. You should be prepared to pay more for quality help, but that becomes possible as your income grows. In any case, if you are doing all the writing yourself, then you can probably only realistically manage one or two sites per day.

Can you make money out of blogging?

This is an age-old question. We all dream of leaving our day jobs and striking out on our own into the wide, wide world. There is a kind of freedom that comes from doing your own thing at your own pace. But can you make a living from blogging?

The answer is a massive yes. I make a living out of blogging. Not the kind of eye-popping living that you read about online sometimes, but a decent living all the same. And all my income is passive. The great thing is that content on my sites is evergreen.

Tomorrow I could sit back and relax and I will still be making the over $2000 that I make today. I know, $2000 may not appear to be much, but I live in a country where it’s a lot. And my sites are growing. It’s just a matter of scaling things.

Today I make $2000 from a year-old site that has 4000 visitors per day. If I can grow that to 10000 visitors a day, I will be making over $5000 a month. That’s where the temptation to create new sites becomes too much. With one blog, I sometimes feel like I have hit a brick wall in terms of achieving growth. So, if I can get more blogs, then that will be great. But as said at the top, things never that simple, are they?

What Makes Google Sites The Perfect Platform for Startups?

What Makes Google Sites The Perfect Platform for Startups?

LearnSEOservice is curious about popular e-commerce platforms, especially WordPress and WooCommerce. Every day we explore different features of WooCommerce, in the forms of plugins, extensions, and themes. We hope to share all information, whether primary, informative or insightful, with millions of store owners, customers, and other enthusiasts of WooCommerce, Shopify, or any other online platform.
Contact us: learnseoservice@gmail.com
Contact us

5 Easy Ways to find Trending Products to Sell Online in...

You can find out more about which cookies we are using or switch them off in settings.

This website uses cookies so that we can provide you with the best user experience possible. Cookie information is stored in your browser and performs functions such as recognising you when you return to our website and helping our team to understand which sections of the website you find most interesting and useful.

Strictly Necessary Cookie should be enabled at all times so that we can save your preferences for cookie settings.

If you disable this cookie, we will not be able to save your preferences. This means that every time you visit this website you will need to enable or disable cookies again.